Travel through the north of Iceland and discover spectacular locations such as the Godafoss Waterfall, Reykjadalur, Grjótagjá Cave or Asbyrgi Valley with this Diamond Circle Tour. 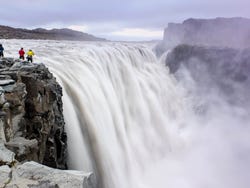 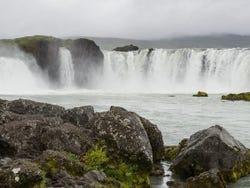 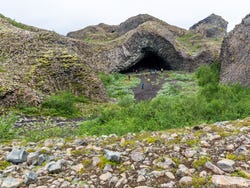 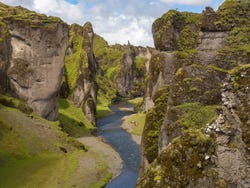 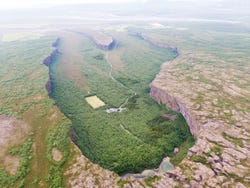 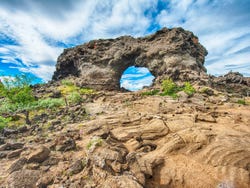 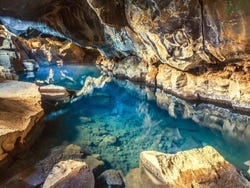 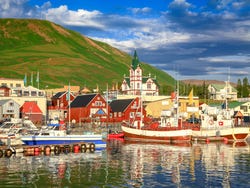 We'll pick you up from your hotel in Akureyri at 8 am and start a tour around the Diamond Circle in the north of Iceland.

The first stop will be at the Godafoss Waterfall, also known as the waterfall of the gods. The waterfall is one of the most important in the country and the birthplace of the Christianisation of Iceland. After discovering its history, we'll cross the Reykjadalur Valley and visit the Skutustadir Craters.

The next stop on the Diamond Circle tour is Dimmuborgir and its impressive lava formations, which originated more than 2000 years ago. We'll take a walk through the s"dark castles" and visit the Grjótagjá Cave.

Other places we'll visit include the Námaskarð fumaroles and Dettifoss waterfall, one of the most impressive waterfalls in Iceland. During the final stretch of the Diamond Circle tour, we'll discover the Asbyrgi Valley, legend has it that it was created by Odin's horse. We'll uncover the many stories that surround this location!

Finally, we'll pass through the village of Húsavík and, after a photo stop, we'll leave you in Akureyri at 12 pm.

All of our providers comply with local legislation and applicable health recommendations to avoid the spread of Covid-19.

The activity takes place with a guide that speaks in english.

Pick up and transfer back to the hotel.

You can book up to the start time, as long as there are places remaining. Book now to guarantee your spot.

Most areas are accessible. Accessible toilets. This must be indicated in the reservation.

US$ 185.10
No hidden fees or surcharges
Free cancellation up to 24 hours before the service starts
Book

Free! Free cancellation up to 24 hours before the activity starts. If you cancel under this time or do not show up, you will not be refunded.
like

9.30 / 10 3 reviews
Discover one of Hjalteyri's best-kept secrets! Step aboard our traditional boat and experience the tranquillity of whale watching in these incredible scenic sur
US$ 86.60
Book
like

No rating yet
Can you imagine anything more magical than seeing whales and dolphins swimming in the waters around Iceland under the incredible light of the midnight sun​?
US$ 88.80
Book
like

No rating yet
If you love wildlife, don't miss this incredible whale watching cruise in Akureyri. Spend three hours searching for the majestic creatures in Eyjafjörður.
US$ 88.80
Book