Feel like one of the Night's Watch on this tour that takes you around the scenes where Game of Thrones was shot. You'll discover the North, The Vale of Arryn, and beyond the wall... 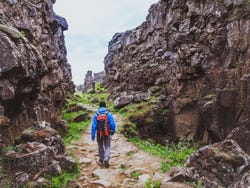 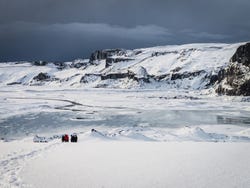 We'll leave Reykjavik first thing in the morning, heading south to tour some of the locations where the eight seasons of Game of Thrones were set. You'll hear the stories about the different series, while we reconstruct some of the most unforgettable scenes which took place in each location.

We'll visit the Thingvellir National Park, the real world location of the Bloody Gate in the Vale of Arryn, and the area used to shoot "Beyond the Wall". You'll be able to walk the tectonic plate where Brienne of Tarth and The Hound faced off (only during the summer months) and follow in the footsteps of the Wildlings, as they pillaged the land just south of the wall.

During the excursion, we'll make a stop in the village of Arnes, where we'll have 40 minutes to eat lunch (not included) before continuing to explore the Icelandic highlands, visiting an ancient Viking village, also attacked by the wildlings as they entered the lands south of the wall,

The tour returns to Reykjavik around 6 pm.

The bus is suitable for foldable wheelchairs but take into account that this tour takes place in a natural environment, and that not all areas will be accessible for those with disabilities.

When making your reservation you'll see a list including the majority of the hotels in Reykjavik. Next to the name of your hotel, you will find the nearest meet point. As the majority of the streets in the centre are not accessible by bus, you will need to make your way to a nearby location, indicated as a "bus stop" and with a number.

For example, if you choose "20:30 - 1919 Hotel Radisson BLU (Please stand by for pick up at bus stop no 4 - Tryggvagata))" you should be ready at 8:30 pm at bus stop 4 (Tryggvagata). You'll find details about the location of the stop in the reservation confirmation.

All of our providers comply with local legislation and applicable health recommendations to avoid the spread of Covid-19. Show more

A safe distance of one metre between clients will be maintained whenever possible.

The use of masks is obligatory. The client must bring their own mask.

Alcohol gel will be available before, during, and after the service.

All those running the service (guide, driver etc...) will wear a mask throughout its duration.

Handing out of printed material such as maps or brochures will be avoided.

The transport used will be disinfected before and after each service and deep-cleaned every 24 hours.

Showing your voucher on your phone will be enough, and it is not necessary to print anything.

The activity takes place with a guide that speaks in english.

Book now to guarantee your spot.

Accessible only for folding chairs.

US$ 131.80
No hidden fees or surcharges
Free cancellation up to 24 hours before the service starts
Book

Free! Free cancellation up to 24 hours before the activity starts. If you cancel under this time or do not show up, you will not be refunded.

It is a pity that they do not do this Tour in Spanish. Opinion translated. Show original.

I travelled by myself
10

I travelled with my partner
8

I travelled with friends
10

I travelled by myself
10

I travelled by myself
Show all the reviews
like

No rating yet
Enjoy the unique experience of fishing off the coast of Reykjavik on this angling trip: climb aboard a boat and indulge in a delicious lunch too!
US$ 120.40
Book
like

9.70 / 10 28 reviews
Vibrantly colourful mountains, hot springs and volcanic landscapes: discover the incredible Icelandic Highlands on this day trip to Landmannalaugar.
US$ 184
Book
like

8.70 / 10 103 reviews
Have a stressfree trip, and save money and time, by booking a shuttle bus transfer between Reykjavik and the city's airport.
US$ 31.90
Book