The Republic of Iceland belongs to the European continent, although in geological terms it lies right between the tectonic plates of North America and Eurasia. It's located just south of the Arctic Circle, between Greenland and the Faroe Islands, west of Norway and northwest of the United Kingdom.

Iceland is an island country, and is the second largest island in Europe after Great Britain, as well as being in the top 20 largest islands in the world. Besides the main island, which accounts for more than 95% of the country and is home to the main tourist attractions and cities such as Reykjavik and Akureyri, Iceland has more than 40 islets, like the Vestmannaeyjar archipelago, most of which are uninhabited and inaccessible to tourists. In total, the country has a surface area of approximately 40,000 square miles (103,000 square km).

Land of Ice and Fire

Iceland is characterised by the extreme contrasts of its geography between volcanoes and glaciers, earning it the nickname  "the land of ice and fire". In fact, the country's own flag represents these differences: the red of the cross represents the volcanic lava, the white border is associated with the ice of the glaciers, and the blue is associated with the sea that surrounds the island. The many different natural hot springs, like the famous Blue Lagoon and the country's geysers are owed to Iceland's geothermal and volcanic activity.

Another big difference in Iceland's geography is between the coastal areas, where the main cities and towns are located, and the inland Highlands, where human settlement is practically non-existent and the desert-like landscapes are more similar to Mars or the Moon. Having said that, these inhospitable areas are home to some of the most spectacular natural sights in Iceland, like the Askja Volcano and the mountains of Landmannalaugar.

One of Iceland's greatest natural attractions are its waterfalls. Frequent rain and snow caused by its north Atlantic climate and large glaciers due to its near-Arctic location create large, powerful rivers ending in abundant breathtaking waterfalls like Dynjandi and Skógafoss. 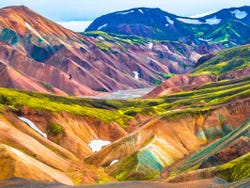 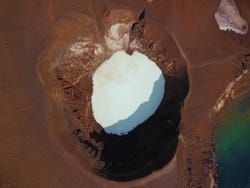 Askja Volcano from above 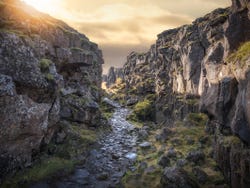 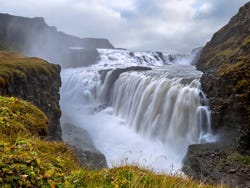