Nestled between dramatic mountains and one of Iceland's most beautiful fjords is Seydisfjordur, a tiny but beautiful town that embodies traditional Icelandic style.

While there is evidence of people living in Seydisfjordur dating back to Iceland's early settlement period, the town wasn't founded until the 19th century, when Norwegian fishermen built it up as a small port. A boom in herring fishing meant that Seydisfjordur later became the most prosperous town in eastern Iceland.

In fact, many of the picturesque wooden buildings in the village have their origins in those golden years, and some were even brought disassembled over from Norway itself. You can experience a Norwegian town without leaving Iceland!

Decades later, after having served as a base for the American and British armies, Seydisfjordur entered an economic depression following the gradual recession of the herring industry. Today, the town continues to live off fishing, tourism and handicrafts, having been established as one of the main stops on cruises around Iceland.

What to see in Seydisfjordur?

The ideal plan when visit Seydisfjordur is to take a leisurely stroll through its picturesque streets and admire the surrounding mountains and fjord. Thanks to its small size, you should be able to see all of its main places of interest:

How to visit Seydisfjordur?

The most convenient way to get to Seydisfjordur is by rental car. Driving on the Ring Road, you just have to turn off on Route 93 at Egilsstadir and enjoy the beautiful, winding road for about half an hour. It is paved and suitable for any type of vehicle.

Another way to get to Seydisfjordur is on a cruise around Iceland. Many boats stop here during the summer months, and the town serves as a gateway to Iceland for many tourists. 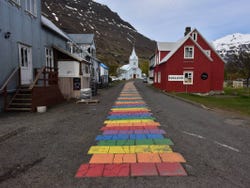 Rainbow path to the Blue Church in Seydisfjordur 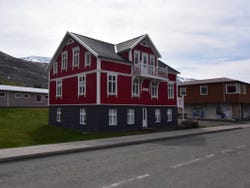 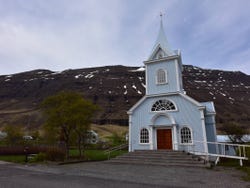 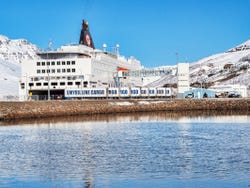 Ferry at the port in Seydisfjordur 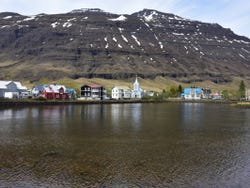 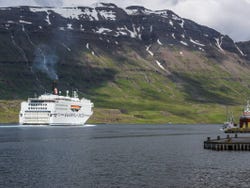