Hraunfossar is one of Iceland's most unique waterfalls, not because of the size or flow of the cascades but because of the way in which they come to the surface. Filtered through the Hallmundarhraun lava field, the series of waterfalls pour into the Hvítá River from low ledges of volcanic rock, creating a beautiful landscape.

The name of the waterfall, as with the vast majority of waterfalls in Iceland, gives us clues as to what we will find: in the Icelandic language, "hraun" means lava and "foss" means waterfall.

Right next to Hraunfossar is Barnafoss, "the children's waterfall". According to legend, it owes its name to the tragic tale of two children dying in its raging waters on Christmas Eve several centuries ago. According to the story, their mother destroyed one of the natural rock arches over Barnafoss so that the tragedy would never happen again.

Not far from Hraunfossar is Europe's most powerful hot spring: Deildartunguhver. It's only a quick stop and you can't get too close for safety reasons, but it is an impressive sight to behold, and its geothermal benefits are used to heat most of the water in the nearby towns of Borgarnes and Akranes! 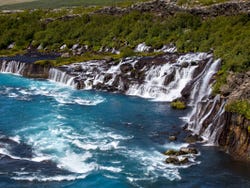 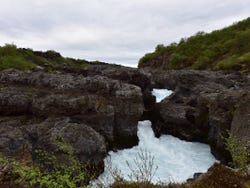 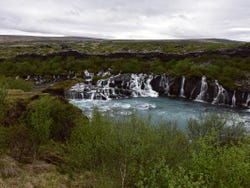 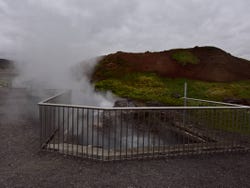 120 km northeast of of Reykjavik.