Delve into a volcanic lava tube on this tour of the caves of Raufarhólshellir, one of the longest lava tunnels in Iceland, on this tour from Reykjavik. 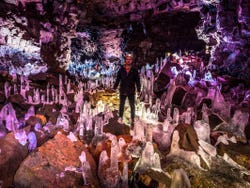 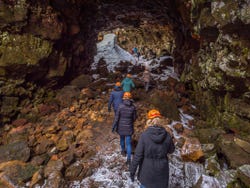 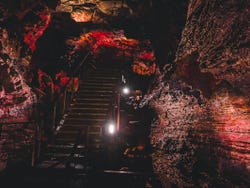 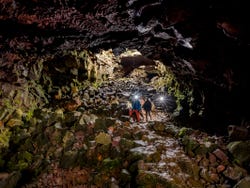 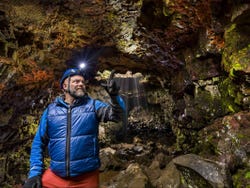 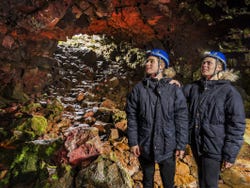 After meeting at your chosen time at the BSI Bus Terminal in Reykjavik, we'll set off from the Icelandic capital towards the Raufarhólshellir lava tunnel, located just half an hour's drive away.

Once we reach the cave, we'll get kitted out with safety helmets with flashlights to embark on a guided tour of the lava tube. The one-hour visit will take us on a route around the caves and underground galleries created by volcanic activity over 5000 years ago.

The tunnel is almost 4,500 feet (1,360 metres) long, making it the fourth-longest lava tube in Iceland, and our low-difficulty walk will cover around 1,150 feet (350 metres) of it, allowing us to see an amazing array of colours created by the different volcanic minerals embedded in the rock. What's more, we'll learn all about the natural phenomena that shaped this geological gem. The Scandinavian country has several lava tunnels, but Raufarhólshellir is one of the most spectacular.

The Raufarhólshellir lava tunnel has several wooden staircases and walkways that allow us to visit different areas of the cave in complete safety. Among them is a very special cave: perhaps you'll recognise it from the movie Noah, starring Russell Crowe and Anthony Hopkins, that was filmed here.

At the end of our visit to the lava tunnel, we'll make the return journey to our original departure point by bus, where you'll be dropped off around 30 minutes later.

All of our providers comply with local legislation and applicable health recommendations to avoid the spread of Covid-19.

Transport by bus with WiFi on board.

Helmet, flashlight and all necessary equipment to explore the tunnel.

You can book up to the start time, as long as there are places remaining. Book now to guarantee your spot.

All services published on Civitatis are carried out in accordance with our Sustainability Code.

US$ 97.50
No hidden fees or surcharges
Free cancellation up to 24 hours before the service starts
Book

Free! Free cancellation up to 24 hours before the activity starts. If you cancel under this time or do not show up, you will not be refunded.

Very good the tour, impressive the tunnel, the different colors of the stones, the incredible stalactites and stalagmites. I fell before entering the tunnel, because there was a lot of snow, I was scared, but when I entered, it reminded me of the Alibaba cave !!! Opinion translated. Show original.

Well organized, all on time and a very interesting visit to the tunnel. The guide was very friendly and explained very well, the driver was also kind and friendly. Of course, the price has seemed excessive, especially compared to other more complete and varied excursions. Opinion translated. Show original.

Very expensive for what it really is Opinion translated. Show original.

I travelled by myself
Show all the reviews
like

9.50 / 10 16 reviews
Explore the South Coast of Iceland and discover spectacular volcanic landscapes and waterfalls sure to leave you breathless. Unmissable!
US$ 112.30
Book
like

8.60 / 10 115 reviews
Geysir Hot Springs, Gullfoss Waterfall, Thingvellir National Park... Discover the incredible natural landscapes of Iceland on this tour of the Golden Circle.
US$ 74.30
Book
like

8 / 10 4 reviews
Get the Reykjavík City Card and explore the most iconic places of Iceland's capital: museums, thermal pools and even a ferry ride!
US$ 30.90
Book