Puffin watching is a must-do activity on your trip to Reykjavik. Cruise around the Icelandic islands, admiring their rugged beauty and discovering the large populations of puffins that live there. 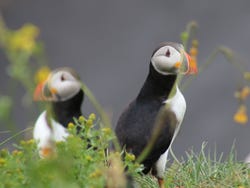 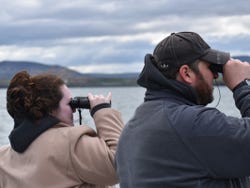 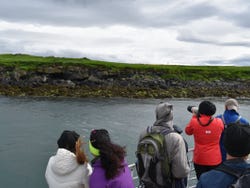 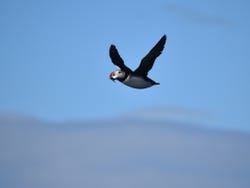 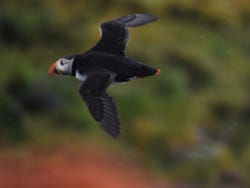 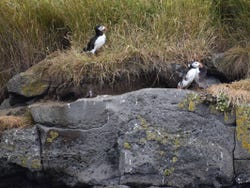 What's the best time of year to see puffins in Reykjavik? Between May and August, these birds return to Iceland after a long winter at sea and inhabit the Nordic islands.

After boarding our boat, we'll set sail to the north, where we'll find some of the Icelandic islands with the largest populations of puffins. Their black and white feathers can make them hard to distinguish from penguins, until you see their brightly coloured beaks! There will be plenty of time to take photos and to use binoculars to get a closer look at the birds.

Throughout the tour, the English speaking guide will reveal curious facts about the lives of these birds. Did you know, for example, that puffins are monogamous? And that they only lay one egg a year? You'll be puffin experts by the end of our trip! What's more, you'll also get to see some of the other birds that inhabit the area, such as the common eider, the arctic tern and cormorants.

What island will we visit?

On the day of the tour, the boat captain will decide which Reykjavik island we'll visit for the best puffin sighting opportunities. Depending on the tides and weather conditions, we may head towards Engey, Akurey or Lundey. All three are located a similar distance from the city and are known for the abundant presence of puffins.

We won't disembark on any island so as not to disturb the birds, but we'll get as close as we can to their coasts, always respecting the puffins.

This activity doesn't include pick up from every hotel as the roads in central Reykjavik aren't accessible by coach. When you choose the name of your hotel during the booking process, you'll be shown the nearest pick-up point. If the text "Bus stop" with a number appears next to the name of your hotel, you'll need to go to that stop. There are thirteen bus stops:

You can check the location of the bus stops on this map. The bus will pick you up from the specified meeting point 30 minutes before the scheduled time.

If you can't get enough of Iceland's incredible wildlife, don't miss Whale Watching in Reykjavik.

Please check local restrictions before traveling. All of our services comply with recommendations to avoid the spread of Covid-19.

Transport by coach and boat.

You can book up until the previous day (8:00 am) if there are still places available. Book now to guarantee your spot.

All services published on Civitatis are carried out in accordance with our Sustainability Code.

The visit has exceeded our expectations. The guide is very attentive. The boat very well. All perfect. Opinion translated. Show original.

I travelled with teenagers
Show all the reviews
like

8.20 / 10 120 reviews
Have a stressfree trip, and save money and time, by booking a shuttle bus transfer between Reykjavik and the city's airport.
US$ 29.80
Book
like

8.70 / 10 8 reviews
Discover the natural wonders of Iceland thanks to the interactive exhibits and planetarium of the Perlan Museum in Reykjavik.
US$ 30.10
Book
like

5.50 / 10 4 reviews
Enjoy an unforgettable day with this tour which takes you to see the Northern Lights, one of the most spectacular natural sights in the world.
US$ 48.40
Book