Do you want to experience all of Iceland's natural wonders? Don't miss this tour that includes whale watching as well as visits to the Gullfoss waterfall and the Great Geysir. 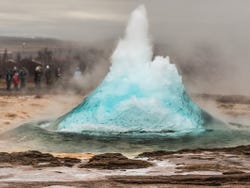 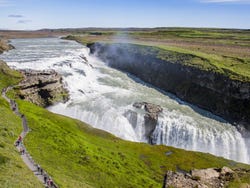 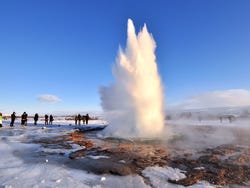 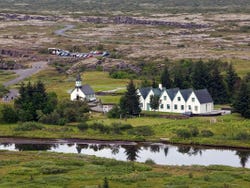 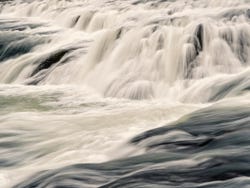 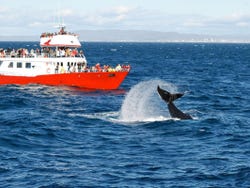 After picking you up from one of the meeting points in Reykjavík, we'll head off to the Port of Reykjavík. From here we'll set off on a boat trip around the Faxaflói bay at 9 am.

For the first three hours we'll enjoy whale watching on the Atlantic Ocean, and you'll be left speechless by these magnificent, enormous creatures. What's more, depending on the time of the year and the currents, we'll also be able to spot some dolphins and killer whales.

When we return to the port of Reykjavik, we'll visit the Whales of Iceland Exhibition, where we'll see 23 life-size whale models. Afterwards, we'll take a 30-minute break so you can get something to eat. We recommend bringing a picnic.

After lunch, we'll set off on a bus tour of the famous Golden Circle. In less than an hour, we'll arrive at Thingvellir National Park where Thingvallavatn, Iceland's largest natural lake.

We'll now head to one of the most exciting parts of the tour: the Gullfoss waterfall, which will take your breath away.

Our next and final stop will be Geysir, known for its geothermal activity. We'll see Strokkur, one of the most famous geysers in Iceland, and marvel at its 15 metre high eruptions.

The trip will end at 7 pm when we head back to Reykjavik and drop you off where we picked you up from in the morning.

When you book you'll see a list of most of the hotels in Reykjavík. Next to the name of your hotel you'll see the nearest meeting point. As many of the streets in the centre are not accessible by bus, you'll have to head to a nearby location, which will be indicated as 'Bus stop' and a number. This is where you'll be picked up from.

All of our providers comply with local legislation and applicable health recommendations to avoid the spread of Covid-19. Show more

A safe distance of one metre between clients will be maintained whenever possible.

The use of masks is obligatory. The client must bring their own mask.

Alcohol gel will be available before, during, and after the service.

All those running the service (guide, driver etc...) will wear a mask throughout its duration.

Handing out of printed material such as maps or brochures will be avoided.

The transport used will be disinfected before and after each service and deep-cleaned every 24 hours.

Showing your voucher on your phone will be enough, and it is not necessary to print anything.

Hotel pick up and drop off.

Ticket to Whales of Iceland Exhibition.

You can book up to 2 days before (Reykjavík local time) if there are still places available. Book now to guarantee your spot.

US$ 194.40
No hidden fees or surcharges
Free cancellation up to 24 hours before the service starts
Book

Free! Free cancellation up to 24 hours before the activity starts. If you cancel under this time or do not show up, you will not be refunded.
like

9.50 / 10 16 reviews
Explore the South Coast of Iceland and discover spectacular volcanic landscapes and waterfalls sure to leave you breathless. Unmissable!
US$ 112.30
Book
like

8.60 / 10 115 reviews
Geysir Hot Springs, Gullfoss Waterfall, Thingvellir National Park... Discover the incredible natural landscapes of Iceland on this tour of the Golden Circle.
US$ 74.30
Book
like

8 / 10 4 reviews
Get the Reykjavík City Card and explore the most iconic places of Iceland's capital: museums, thermal pools and even a ferry ride!
US$ 30.90
Book